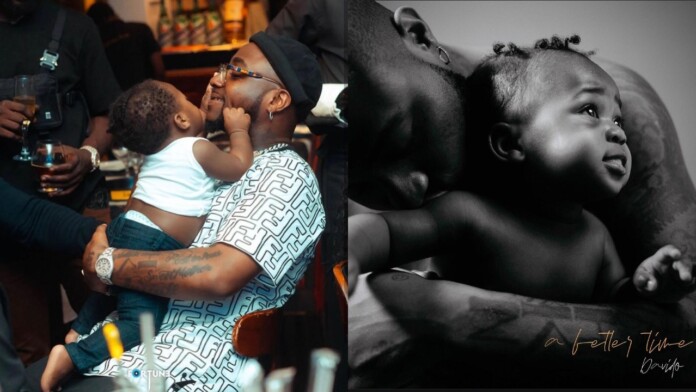 Following the unveiling of Davido and Chioma’s son, Ifeanyi, social media users have aired their opinion on the little one and what they think of him.

Kemi Filani recalls that few hours go, the multiple award winning singer took to his social media page to announce that his album would drop on Friday, November 13. The announcement came with an adorable photo of his son Ifeanyi as he was spotted on the cover of the album.

The little boy’s photo has however trailed so many reaction among social media and many have decided to share their thoughts.

Read some comments below;

@iyke_shot_it wrote “This picture is just everything..Davido and Ifeanyi.. A G.O.A.T and the son of a G.O.A.T

@PRoflagos wrote “There’s no “better time” to unveil IFEANYICHUKWU.Ok handCamera with flash Imagine what the full album would be like, if just two tracks caused massive explosions all round the world but mine”

@mafia10114 wrote “Davido carbon copy ifeanyi… a better time soon .. they will cry according to their family problems very soon

@sir__dami wrote “Davido has released the official track list for A better time, with his son ifeanyi as the album cover”

@Ge_cko1 wrote “Damn!! This is too dope.. Album art of the century..Davido and Ifeanyi looks Paradise..Pour me water.. This album art back cover deserves a Grammy already!! Davido and Chioma don’t miss.. Ifeanyi is so so cuuute