No fewer than 1,500 #ENDSARS protesters have stormed the Agodi Secretariat of the Oyo Government to demand the disbandment of the Special Anti-Robbery Squad (SARS) unit of the Police.

The protesters, who carried placards and sang various solidarity songs, blocked the Secretariat roundabout with a convoy of about 50 exotics cars.

Inscriptions on some of the placards carried by the protesters read “Tell SARS to refund my N3.2million ENDSARS”, “I am my parent’s retirement plan, why do you want to kill me? “We are not criminals” and “I am not a Yahoo boy” among others.

For more than four hours, all the three entrance and exit gates were shut by security operatives over the fear of protesters gaining access to the Secretariat complex.

The obviously angry youths loudly sang total rejection of SARS, saying the essence and usefulness of the Police is not in doubt but the unit has been monstrous. 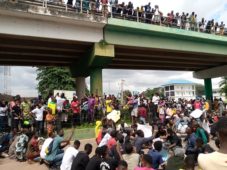 Commuters in and out of the Secretariat were left stranded for hours as many vehicles en route the entrance and exit gates parked, causing traffic congestion inside the Secretariat.

The vehicles used by the protesters as the convoy was parked carelessly to ensure roads were impassable for other users.

Expressing anger, the protesters, mostly youths, said they could not believe Governor Seyi Makinde, his deputy or any other top government official won’t come over to hear their grievances.

They vowed to remain at the entrance gate and ensure it remains locked until the Governor or his deputy attends to them.

An attempt by Commissioner for Youths and Sports, Asiwaju Seun Fakorede, to address the protesters fell on deaf ears as they insisted on listening only to Makinde.

House of Assembly member for Ibadan southeast II, Mr. Yussuf Adebisi, who also attempted to pacify the protesters, was harassed and molested. 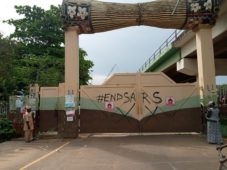 For hours, the lawmaker was denied the opportunity to address them while the protesters refused to allow him to leave the venue or return into the Secretariat complex.

No police or security operative was seen anywhere around the protest area.

As at the time of filing this report, the protesters were still laying siege on the Secretariat entrance, vowing not to vacate until Governor Makinde shows up.