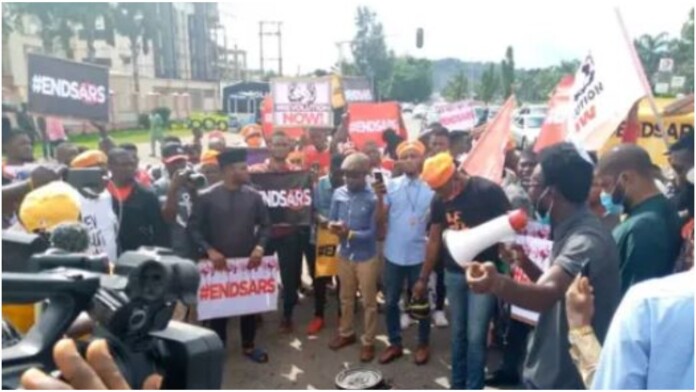 Senior Pastor of the Daystar Christian Centre Sam Adeyemi and Co-convener of Bring Back Our Girls (BBOG) movement Aisha Yesufu have finally reacted to the lawsuit filed against them and several other high-profile names involved in the #EndSARS protests which engulfed Nigeria in October.

Kemi Filani News recalls that a man Kenechukwu Okeke sued them on Monday before a Chief Magistrate Court in Abuja.

In the suit brought before the court, he is asking that the defendants who promoted the protests be brought to justice for allegedly destroying his property.

Reacting to the lawsuit, Adeyemi tweeted on Tuesday night: “Who sent this guy to file this frivolous lawsuit?”

Co-convener of Bring Back Our Girls (BBOG) movement Aisha Yesufu tweeted: “My joy is that they got my name right and I am number one on the list. Thank you #EndSars protesters. I am honoured to be part of you all.”

However, legal practitioner Ayo Sogunro wondered why he had not been named properly.

“If you’re going to name me in a court process, do it properly. My full name is Ayodele Olorunfunmi Sogunro,” he wrote.

Others listed in the suit include Burna Boy, Tiwa Savage, Davido, Falz, Mr Macaroni and Taooma.

Entertainers such as Peter and Paul Okoye, 2Baba, Banky W, Don Jazzy and Yemi Alade also made the list.