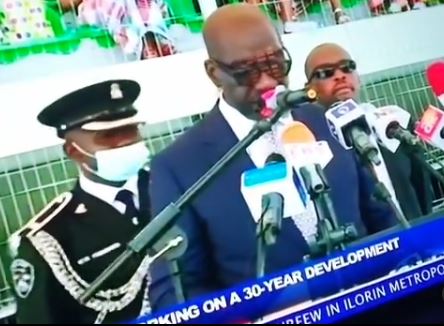 While the governor was reading his inaugural speech, at the ceremony which held at the Samuel Ogbemudia Stadium in Edo State, the ADC collapsed and other security agents rallied round to help him.

Wetin we go call this one naw 😒🙄😕 pic.twitter.com/fGuQadvI9W

Recall that, on Sunday September 20, the Independent National Electoral Commission INEC declared Obaseki of the People’s Democratic Party (PDP) winner of the election after polling 307, 955 votes to defeat his main contender Pastor Ize-Iyamu of the All Progressives Congress APC, who polled 223, 619 votes.

Reacting to the outcome of the election, Mai Mala Buni, who is the APC national caretaker committee, said in a statement that the peaceful conduct of the election and its outcome represents a victory for Nigeria’s democracy.