Reality TV star, Dorathy Bachor has been dragged by a Twitter user after she shared a stunning photo of herself on the social media platform.

The heavily-endowed entrepreneur had taken to Twitter to share a photo of herself looking incredibly gorgeous with her cleavage exposed and she captioned it, WITH MY FULL CHEST and a crown emoji.

The former BBNaija housemate received loads of compliment from her fans and followers. However, a social media user attacked her, saying that despite her full chest nobody is attracted to her and she keeps shoving herself down people’s throat.

“Still with your full chest no one is attracted to you, you keep forcing them to yourself” 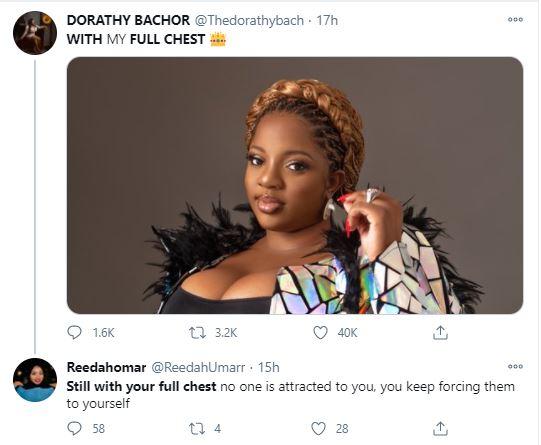 The twitter user was lambasted by fans of the reality star for her derogatory remark. See some of the reactions below,

I understand you need attention to make your life feel less miserable but you can’t say nasty things about people like that ,learn to do better

To think you are a woman…. what a pity….sad for you.